As a leading manufacturer of PCB prototypes and the successfully established 3D printing service, it was quite logical for us to bring these two technologies together.

With the help of the patented LPKF LDS (laser direct structuring) procedure we are able to generate very fine circuits on three-dimensional bodies.
By using 3D printing to form the body of the circuit carrier, and our free 3D MID design software, the opportunity to use this technology for prototypes and small series has never been better. 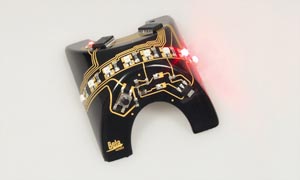 Technology in the third dimension

The metallized thermoplastic part (MID) replaces the mix of printed circuit boards and components, which usually consists of many different materials. The 3D-MIDs are made of recyclable thermoplastics and are easier disposed of than conventional PCBs. 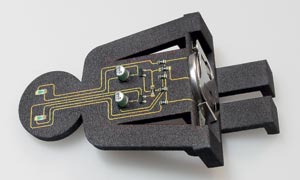 Where is 3D-MID being used?

3D-MID is now found throughout the entire range of electronics. Whenever a higher integration of the electronics is required, such as when space and weight need to be saved, the 3D-MID is the ideal solution.

MIDs allow for more cost effective and faster production of circuits, and design changes can be achieved and implemented in less time. 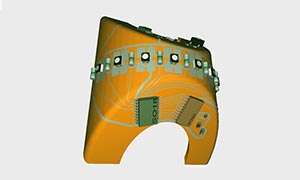 Before serial production there is the prototype

Our main challenge was to produce an MID prototype faster and more economically, which we were not able to achieve previously with the conventional 3D-MID manufacturing and design process. The injection moulded 3D-MIDs, as used in series production require expensive injection moulding tooling and long production lead-times. Laser sintered prototypes can be manufactured at a relatively low price.

The benefits of laser sintered prototypes are:

How is a 3D-MID prototype developed?